It's been about time I replace my aging Eagle double mag pouches. Main issue I have with these is reload time and capacity. Quality itself is not an issue. So I went searching online for a better alternative, something more modern. The Eagle doubles with waist bungee was a bit to tight for 4 mags without pulling the other magazines out. Didn't want to cut the bungee in order to also secure singles with flap folded in.

-2x2 stack pouch or 2x3
-Either open top w/ bungee or smaller flap vs. that of the Eagle
-Affordable, I love the Taco design but simply to expensive when carrying 8+ magazines, likewise with the ITW Fastmags
-MOLLE
-Khaki or CB
-Option of securing single magazines as well

I went through all the major and known manufactures. HSGI, Eagle, LBT, TT, etc. A lot of companies had similar designs in both open shingles and enclosed pouches. I decided to give SOE a shot since I've heard great things (not to mention I love my tablet sleeve). I ordered 2 sets of these:

http://originalsoegear.com/4shingle.html - Only had CB at the moment and only had the 2x3 in Multicam, needed some kind of tan.

Opened up the box and voila! Quad shingle pouch, here is a shot of the front complete with more MOLLE on both front and sides. This gives you a bit more MOLLE real estate, more MOLLE = more modular space for pouches. I plan on putting a double magazine pouch in front. So many options compared to the straight forward flap on the Eagle.
Also notice the pull tab for quick pull access. Eliminates stumbling for a magazine reload. 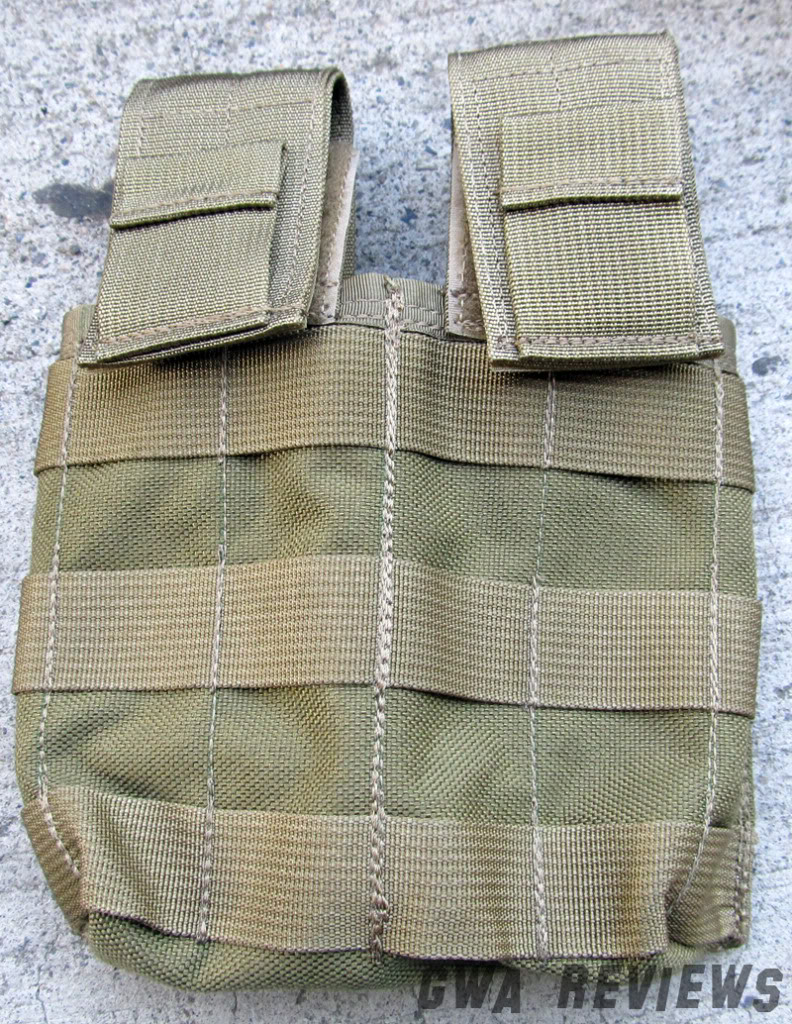 Here is a shot of the rear. I was a bit disappointed that it didn't come with MOLLE straps. Luckily I already had some Tactical Tailor MALICE clips handy. Not sure why they don't come with the straps pre-installed but it would seem that the majority of people buying these mag pouches are adapting them directly to a MOLLE system. Maybe it was just the ones I received since I am aware that a lot of SOE gear is custom and made to order. Still though I would like to see these with straps from factory. 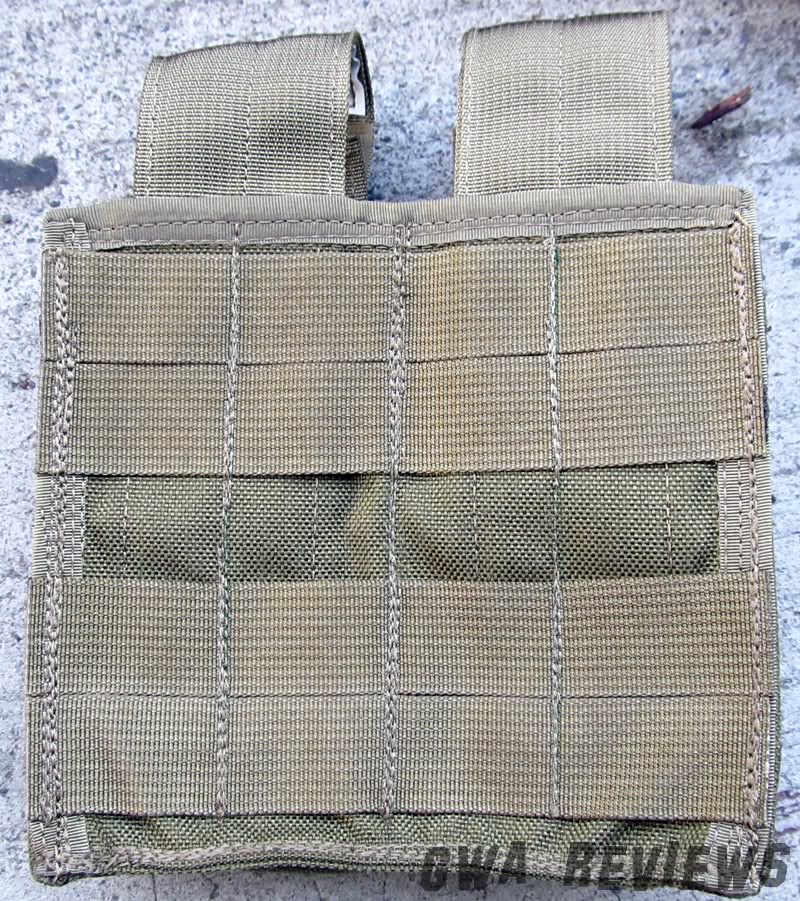 A close-up shot of the 1000D Cordura nylon and stitching. VERY impressed with the stitching, so straight. You'd be surprised how often major brands get a bit sloppy. Top-notch. 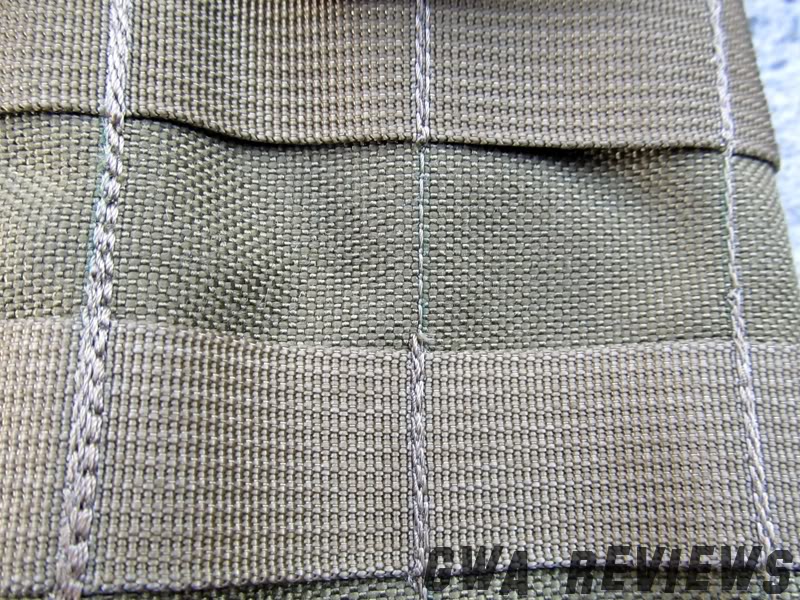 Upon pulling the tab a few things are revealed; velcro closure, snap closure, and SOE signature, "Made in the Motherfucking USA" tag.
The velcro closure is all I really needed and what I'm used to. The snap tab I don't see myself using much and would be impossible to close under stressful environments, however, it doesn't get in the way. For storage and or jumpable situations having that extra security is a plus. 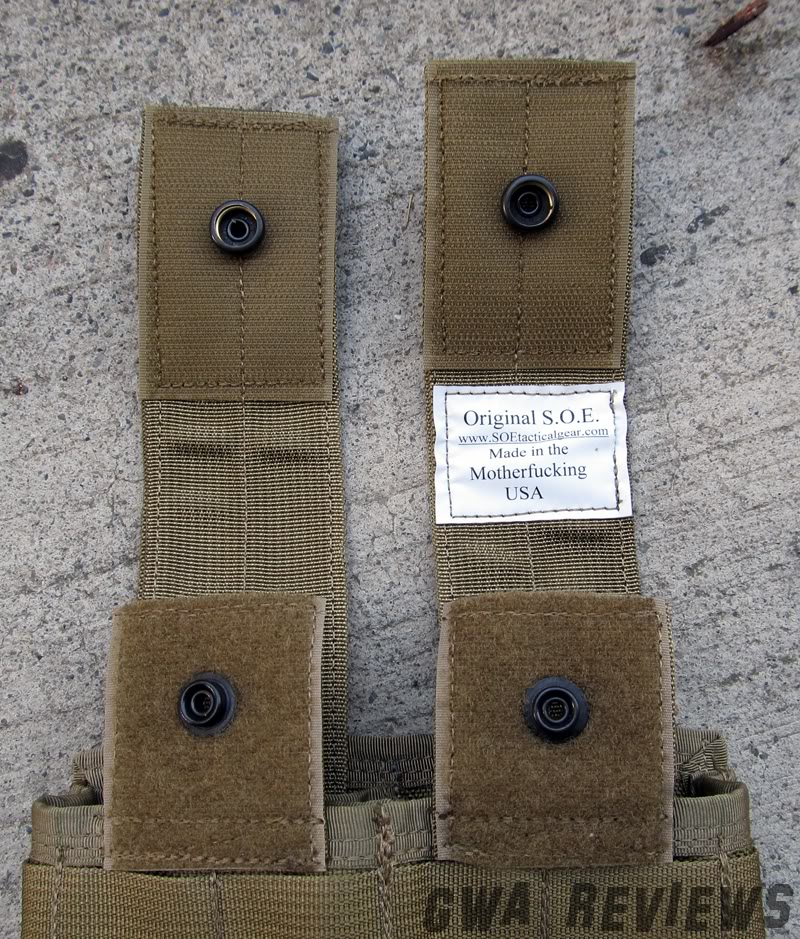 The flaps are removable and adjustable for different fits and size magazines. 30 round mags and larger would fit great. I could also see some AK mags fitting in this pouch. Adjusting the flap is easy and can be done in seconds. The same goes with removing them and re-inserting them.
Once removed the front female velcro strip remains, nowhere to really hide them but they work great as a patch holder. IR tab and medical patches pictured. 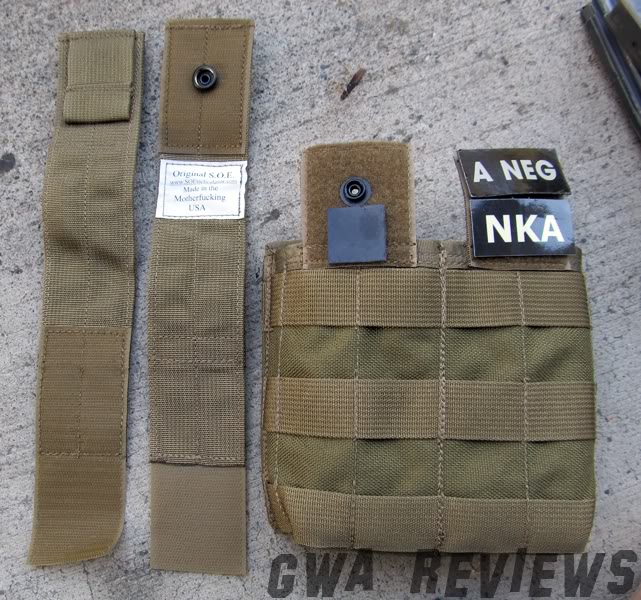 Quick glimpse inside of the pouch. Note the velcro to secure the flap. Plenty of velcro for adjustment, this is another plus depending on the size of magazine you are using.
Middle split panel is also thick and keeps the magazines put and apart.
Also worth mentioning is that small metal grommet on the bottom, great for moisture dissipation. Small details go a long way! 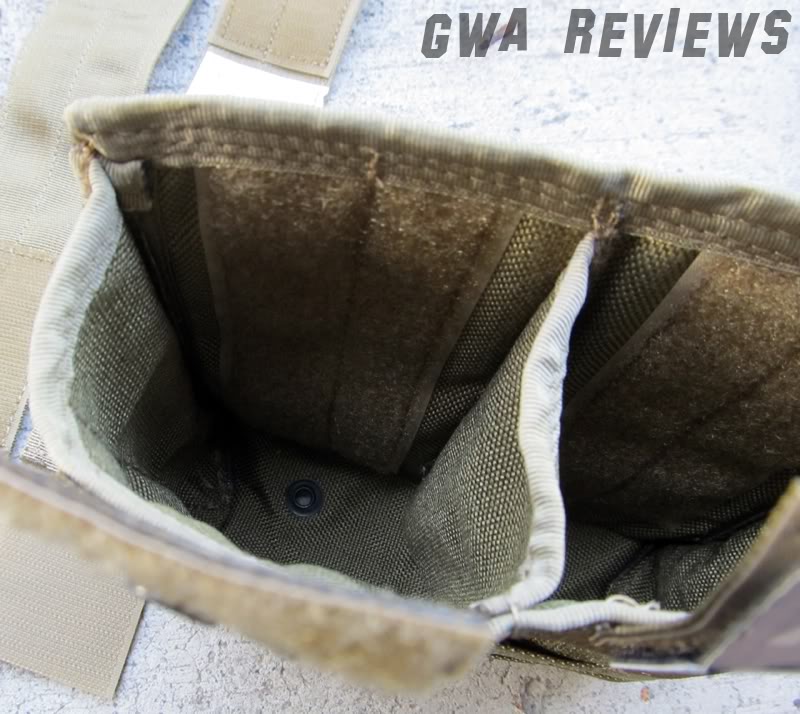 2x2 configuration, this pouch has plenty of space and the magazines pull in and out with ease. My Eagle magazines pouch always seemed like a small battle to "pull out" or to "re-insert".
I noticed that using Magpuls had me adjusting the flaps a bit bigger than I wanted. They also have that old problem where they snag and catch on each other when stacked. So I went ahead and removed them.
Notice how the pull tabs are in a easy reach position, seconds matter. 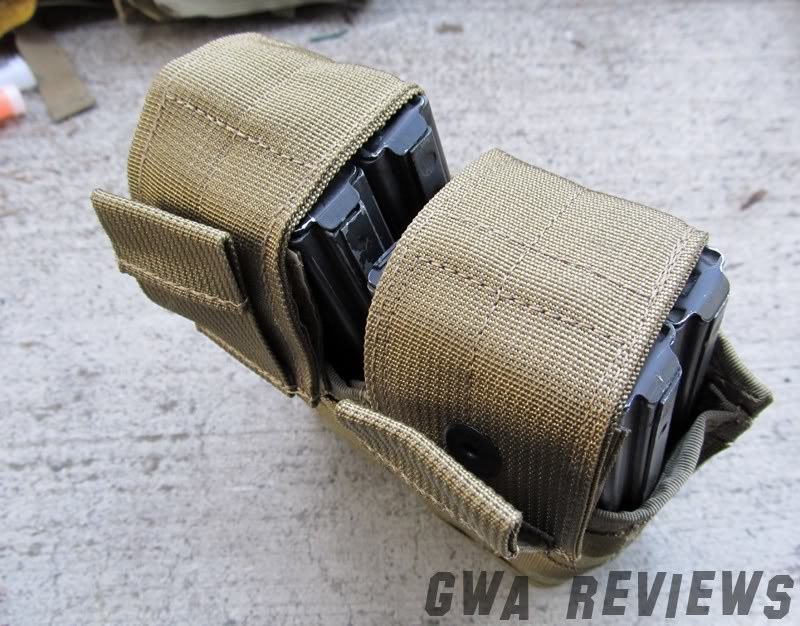 With the flaps open you can see how roomy this pouch is on the sides, I feel spoiled using these new pouches vs. my old battle worn Eagles.
This pouch also works great in single configuration with flap. Keep the flap secure down with velcro and you are good-to-go. However, if you remove the flap and go open top with single there is no bungee to keep them in place and a good chance your mag will go flying. Not a horrible thing considering these were made for 2x2 and are not single shingles. 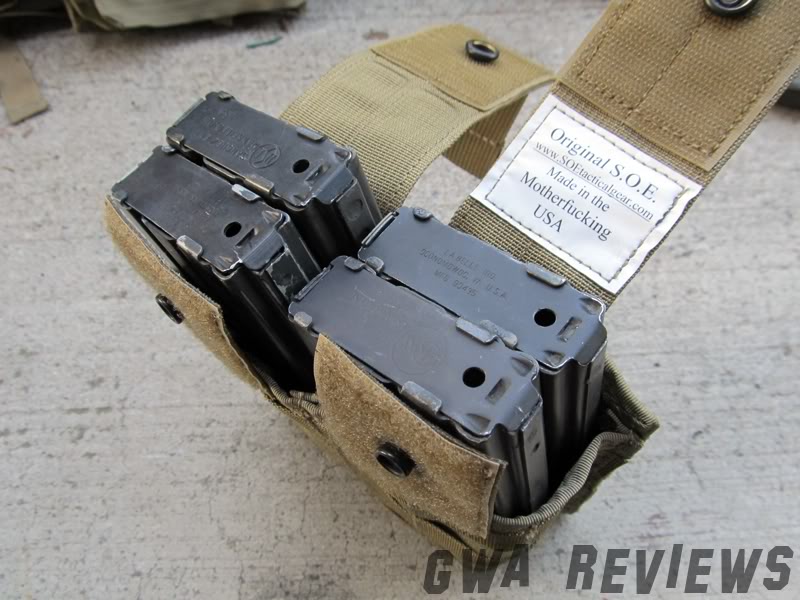 As for color comparison, here is the pouch attached to a Eagle RRV in Coyote Brown. The canteen, single mag, and radio pouch next to it are in Eagle Khaki. The RRV is quite milk chocolatey and very dark. Compared to Khaki and CB the SOE CB is a bit in the middle. I honestly stopped caring about matching Khaki with CB a long time ago. Reason being is by the time it gets worn and dirty it all looks the same. I'm very happy with the color and how it "looks" although function > looks. 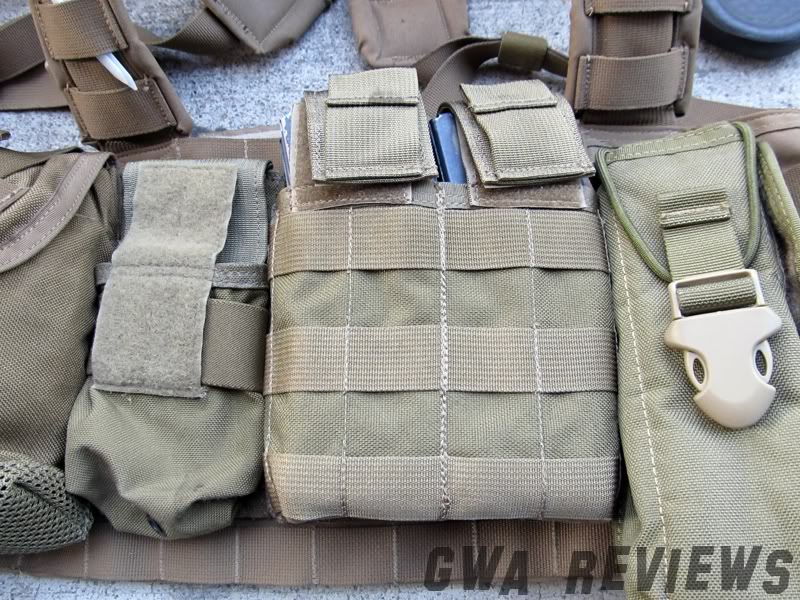 Overall I'm thoroughly satisfied with these pouches. I've been on the market for new magazine pouches but never splurged until now. In my opinion SOE is more than able to hang with the big boys in terms of producing quality nylon gear. These pouches simply just work and do what they're supposed to.

Only 2 concerns I had were about the non-existent MOLLE straps (as stated above) and I wish there was more velcro on the front of the pouch. This for 2 reasons; to allow the flaps to fold down more (see above pic compared to the Eagle) but only when needed, and for the use of more patches. The velcro bit is more nit-picky because I honestly have nothing really negative to say.

With my experience with SOE so far I will go ahead and give them GWA approved status. 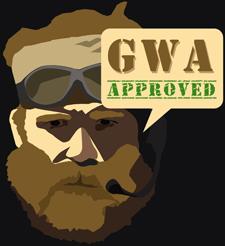 *Disclaimer: the above written words are my own personal honest opinions and thoughts.

i have many pieces from OSOE and never have i been disapointed, they make great stuff, a bit pricey but u get what u pay for.

It didn't dawn on me until now, but after seeing you mention about how much space is in there and the good chance of a mag falling out if the top is not secured, the 60rnd Surefire mags would be perfect for those style of double mag pouches that dont have any form of internal retention. By the way, good job on the review!